Our Home Inspectors at On The Gulf Home Inspection Services are available 7 days a week servicing Oldsmar, Clearwater, Palm Harbor, Safety Harbor, Tarpon Springs, Trinity, Dunedin and the surrounding Tampa Bay area to accommodate your schedule and all of your inspection needs.

Click on the nose of "Snoopy" (below) our Office Manager for any questions you may have regarding our Services or for a Quote.

Oldsmar is a City situated in Pinellas County, Florida, United States. The U.S. Census Bureau estimates the population to be 13,401 as of 2008Located in Pinellas County, Florida, at the northern top of scenic Tampa Bay, the City ofOldsmar is defined by its waterfront shoreline, small-town Old Florida ambiance, lush landscaped boulevards, abundant parks, a 300-acre wilderness preserve, and thriving business environment.  Oldsmar is strategically located between metropolitan Tampa and the West Central Florida Gulf beaches.  The shopping, dining, entertainment, professional sports, and beach life abounds in and aroundOldsmar. The Gulf beaches, Tampa International airport, pro sports venues, USF, Tampa General and Countryside hospitals, golf resorts and Florida's interstates are  all within 20-minutes of Oldsmar. Oldsmar is a outdoor enthusiasts' dream come true with over 41% of the City of Oldsmar dedicated to recreational parks and preserves for enjoying sports, recreation, fishing, nature, hiking and biking trails. Not to mention the sun-sational sunrises and sunsets over Tampa Bay. A variety of waterfront parks have small boat launches, floating docks, piers and natural beaches for boaters and fishermen. Oldsmar offers abundant outdoor  activities including events such as fishing tournaments, arts and craft fairs, concerts, movies, performing arts, nature programs and youth camps. The Oldsmar library and recreation centers offer health and fitness programs, special interest clubs and art and dance classes, youth camps, senior citizen programs, and sports for all ages.Oldsmar's history dates back to 1913 when automobile pioneer Ransom E. Olds purchased 37,541 acres  of land by the northern top of Tampa Bay to establish “R. E. Olds-on-the-Bay”. The name was later changed to Oldsmar, then to “TampaShores” in 1927, and then finally reverted to Oldsmar in 1937. Currently the downtown section of Oldsmar is being developed of which the promoters hope to bring back the "old Florida" feel to the city. Every year Oldsmar celebrates its history  with Oldsmar Days and Nights, where residents and visitors partake in parades, car shows featuring the Oldsmobile and carnival rides. Notable Oldsmar Businesses Include Tampa Bay Downs, the production office of Nielsen Media Research, and Children's Charity Kids Wish Network. 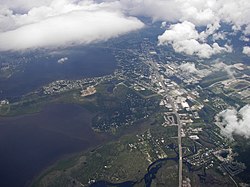 Oldsmar is host to the office of Nielsen Media Research. The majority of the Nielsen Media Research employee's work inOldsmar, and the company's media measurement work originates from the office. The Associated Press said that theOldsmar building, was its nerve center. In 2003 the company moved into its Oldsmar complex and consolidated its employees there, with workers from Dunedin and other areas in Pinellas County moving into the Oldsmar building.

Colleges/universities with over 2000 students nearest to Oldsmar:

Banks with branches in Oldsmar