Click on the nose of "Snoopy" (below) our Office Manager for any questions you may have regarding our Services of for a Quote.

Largo is the third largest city in Pinellas County, Florida, USA and is part of the Tampa Bay Area. Centrally located, it is the crossroads of the county. As of the 2000 census, the City had a total population of 69,371. As of 2004, the population estimated by the U.S. Census Bureau was 71,704.

Largo was first incorporated in 1905. In 1913, Largo became the first municipality in Pinellas County to adopt a Council-Manager government. Largo switched back and forth from "town" to "city" a few times, and became a city again in 1974. Largo was an exporter of agricultural products until the 1960s when the influx of people began to transform Largo into a bedroom community. From 1905 to 2005, Largo grew in area from 9/16ths of a square mile to about 17 square miles, and in population from about 300 people to more than 70,000. Largo began as a rural farming community and became the third largest city in Florida's most densely populated county. Largo is also a sister city to Tosayamada, Kochi, Japan. In 2007, Largo had been named a National Arbor Day Tree City for the seventeenth year in a row.

The original inhabitants of the Largo area were the Tocobaga. They are also known as the Safety Harbor culture from their archeological remains near present day Safety Harbor. The Spanish came to Florida in the 16th century. In the 18th century, the Tocobaga had been virtually destroyed after years of exposure to European diseases, Spanish settlement efforts and warfare between Spain and England. The Largo area, like the rest of Pinellas County, was largely deserted. In 1763, Spain transferred sovereignty of Florida to England. In 1783, Florida fell to Spanish sovereignty once again until it was transferred to the United States in 1821. By 1845, a surveyor noted Lake Tolulu, apparently located south of East Bay Drive and roughly where the Largo Central Park Nature Preserve is today. Among the first homesteaders in the Largo area were the families of James and Daniel McMullen ca 1852.

The McMullens and other settlers raised cattle, grew citrus and vegetables and fished. During the American Civil War, many Largo area residents fought for the Confederate States of America. James and Daniel McMullen were members of the “Cow Cavalry” driving Florida cattle to Georgia and the Carolinas to help sustain the war effort. Other Largo area residents served on blockade runners. Still others left the Largo area to serve in the Confederacy’s armies. After the War, Largo area residents returned to farming, ranching and raising citrus. The Orange Blossom Railroad reached the area in 1888. By this time Lake Tolulu had been renamed Lake Largo, and residents of the community west of the lake adopted the name “Largo“.

The Town of Largo was incorporated in 1905. Lake Largo was drained in 1916 to make way for growth and development. Between 1910 and 1930, Largo's population increased about 500%. Then and for decades afterwards, Largo's economy was based on agriculture—citrus groves, cattle ranches, and hog farms as well as turpentine stills and sawmills. Largo is best remembered as "Citrus City," from the time Largo was a citrus packing, canning and shipping center.

The Great Depression was unkind to Largo. Largo lacked the financial resources to meet its obligations. Largo reverted to its 1913 boundaries and charter. The population dropped approximately 30%. The debt incurred by the issuance of bonds in the late 1920s was not paid off until after World War II.

The years after World War II saw rapid growth as people began moving into the area and Largo annexed surrounding lands. During the Nuclear Arms Race, electronics companies like General Electric andHoneywell boosted the economy. The population increased to about 5,000 in 1960, to about 20,000 in 1970, and to about 70,000 in 2005. Largo's original area was 9/16th of a square mile. By 1982, Largo had grown to about 13 square miles and covers about 17 square miles in 2005. The groves, farms, ranches and forests have mostly given way to homes and shopping centers and light industry. Largo's increased population resulted in a need for increased city services. All departments saw rapid growth and improvements in quality, especially under the leadership of the late Mayor Thom Feaster. In 1995,Largo Central Park opened on the site of the old Pinellas County Fairgrounds. It is the setting for the Largo Cultural Center and the Largo Public Library.

In the 2006 commission elections, Largo achieved two milestones furthering its motto of "City of Progress." Democrat Patricia Gerard became Largo's first female mayor. She narrowly defeated incumbent mayor Dr. Robert E. Jackson, Ph.D. in a bitterly contested race. (Dr. Jackson had been the longest serving elected Democrat in Pinellas County.) The voters' choice between these two candidates decided the major issue of the election: that Largo would not revert to a mayor-dominated process of governance in lieu of the continuing role for the seven member Commission acting as non-partisans that is, deliberating independently and equally with the Mayor and deciding democratically the political issues of the City.

Largo elected its first Commissioner of African-American descent, Rodney J. Woods, in a landslide against a former commissioner.

In February 2007, Largo made headline news when it was announced at a press conference that the City Manager, Steve Stanton was a transsexual and that he was to transition to living as a woman. After several weeks of public debate, copious citizen input and frenzied media coverage, the City Commission voted 5:2 to remove Mr. Stanton from his position.

Largo is located at 27°54′30″N 82°46′40″W . Largo is centrally located in Pinellas County, touching the Intracoastal Waterway to the southwest and Tampa Bay to the northeast. Clearwater is Largo's neighbor to the north. To the northwest are the towns of Belleair and Belleair Bluffs. The City of Pinellas Park lies south of eastern Largo. Seminole lies south of western Largo. The community of Ridgecrest forms a large enclave between western and central Largo. A number of Pinellas County suburbs pepper the City of Largo.

In 2004, Largo's land area was about 17 square miles including 651 acres of park lands. The City of Largo's lowest elevation is sea level. At its highest, the Largo's elevation is about 69 feet. Largo is dotted with a number of lakes, the largest of which is Taylor Lake at 53 acres. Allen's Creek drains northeast Largo, flowing into Tampa Bay. McKay Creek flows through southwest Largo into the Intracoastal Waterway. The McKay Creek basin is prone to flooding because of its size and its relative elevations.

Largo is located on the Pinellas Peninsula, so that its climate is mediated by its close proximity to the Gulf of Mexico and further mediated by Tampa Bay. In the winter, temperatures are warmer on the Pinellas Peninsula than on mainland Florida. Winters are generally drier than the rest of the year. Most of the rainfall occurs in the summer, when the sea breeze carries moisture from the Gulf of Mexico inland. Largo's record low is 22 F, recorded on December 13, 1962. Largo's record high is 100 F, recorded on July 5, 1995.

Household income 2000 census data for Largo, Florida and environs. Area shown exceeds the corporate limits of the City of Largo.

There were 34,041 households out of which 17.0% had children under the age of 18 living with them, 41.8% were married couples living together, 9.0% had a female householder with no husband present, and 46.0% were non-families. 38.5% of all households were made up of individuals and 19.3% had someone living alone who was 65 years of age or older. The average household size was 1.99 and the average family size was 2.59.

With the decline of agriculture and the influx of new residents commencing in the 1960s transformed Largo into a bedroom community. Electronics, though important, could not fill the gap left by agriculture. Other light manufacturers fill various niches. The vast majority of jobs in Largo are in services and in retail sales.

The health care industry continues to grow to meet the needs of an aging population. Hospitals are among the area's strongest employers. Largo Medical Center Hospital, owned by HCA, was built in 1978. It is the only hospital in Pinellas County with all private rooms. Sun Coast Hospital, a not-for-profit owned by a community foundation, was founded in 1957.

At one time Largo had the headquarters of Eckerd Corporation.[8]

The City of Largo is served by two international airports, Tampa International Airport and St. Petersburg-Clearwater International Airport. St. Petersburg-Clearwater Airport is located about six miles east of downtown. Tampa International Airport is located about twenty miles east of downtown on the other side of Tampa Bay. The Pinellas Suncoast Transit Authority provides bus service throughout Pinellas County and express service to Tampa. State Roads 686 and 688 pass through Largo to connect with Interstate 275, which connects with I-75. US 19 and US-19A run north-to-south through Largo. A grid of county roads connects Largo with its neighbors.

Fortis College has a campus in Largo, Florida that offers career training in the medical, HVAC and cosmetology fields.[12]

The City of Largo has garnered a number of awards and certifications. In 1999, Largo Fire Rescue became the second agency in Florida to earn accreditation from the Commission on Fire Accreditation International. The Largo Police Department won accreditation by the Commission for Florida Law Enforcement Agencies and the Commission on Accreditation for Law Enforcement Agencies, Inc. The Public Works Department was accredited by the American Public Works Association in 2008. Largo's Solid Waste workers regularly win awards at the SWANA International Truck & Mechanic ROAD-E-O. Largo's CFO, Kimball Adams, won the 2004 Florida League of City's CFO of the Year Award. In 2005, the "new" Largo Public Library won the award for the Best Design in the Government / Institutional category at the International Interior Design Association 2005 Forum Awards. In 2000, the library won the Genealogy Outstanding Achievement

The Police Department's role encompasses law enforcement within the corporate limits of the City of Largo. 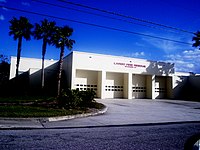 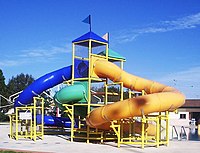 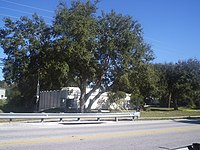 The Largo Public Library is one of the most heavily used libraries in Pinellas County, with an annual circulation of over 700,000 items. The collection includes a variety of formats, including books, DVDs, CDs, videos, e-books and audio book collections.

The Largo Public Library houses several special collections, which include the genealogy collection, the Rugg Financial Center, the Small Business Resource Center, a large print collection and a parent-teacher collection. The library offers a variety of educational and cultural programs on subjects that include literary figures, historical topics, financial and legal issues, parenting, health, social issues and environmental concerns. It also has a specialized teen-only section which hosts multiple events.

Colleges/universities with over 2000 students nearest to Largo: